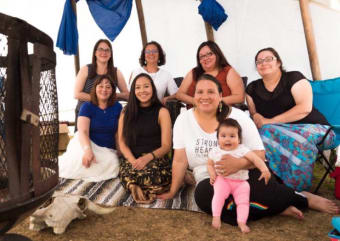 Indigenous women are beautiful and powerful and resilient. They are worthy, and they deserve to be moms to their children.

Many indigenous women in Manitoba live in fear that child and family services will take away their children due to allegations of substance abuse, neglect, or poverty. Indeed, this province has the highest rate of child apprehension in Canada, and around 90 percent of the kids in the foster care system are indigenous. “The stereotype is that indigenous women are disposable, their families are being raised in horrible poverty, they’re not capable of raising healthy robust children,” said Lavand. These racist stereotypes can make birth experiences intimidating and traumatic for many indigenous women, she explained.

Since becoming a doula, Lavand believes that the training of indigenous women as Birth Helpers changes the narrative of birth for indigenous women. During a birth, indigenous doulas may sing traditional songs, fan women with eagle feathers, and play drums. They are also there to help women interact with doctors and nurses and navigate the risk of child apprehension.

What is so often a source of trauma, Lavand says, can be the foundation of a newfound source of strength. That is the essence of the Manitoba Indigenous Doula Initiative, which trains indigenous women in Manitoba to support other women in the Canadian province through their pregnancies.

For the initiative’s co-founder, Kathleen Bluesky, healing from the traumas of colonization and reclaiming traditional ways starts with birth. “Every woman knows how to give birth and how to bring life into this world, and we all carry that instinctive knowledge,” she said. “Getting people who have been so devastated by loss to reclaim that level of confidence—that’s a huge undertaking.”

Communities are just beginning to understand the various benefits of doulas for indigenous women. Results from the pilot project show that indigenous doulas have the potential to address negative birth experiences and systematic biases in the health-care system, as well as to help indigenous women connect with the spiritual traditions around being a “life-giver,” described by Bluesky as the traditional roles and customs around reproduction in indigenous communities.

A focus of this particular doula training is addressing the ways colonization has affected indigenous birthing practices and motherhood. This is central to the ways many indigenous Birth Helpers understand their unique roles in various Native communities across North America, including in the United States. The Changing Woman Initiative, an indigenous birthing center in New Mexico, articulates its mission on the website, “to renew cultural birth knowledge to empower and reclaim indigenous sovereignty of women’s medicine and life way teachings.”

“With the interruptions of colonization, the role of life-givers was displaced in the community,” said Bluesky. “Pregnancy was once honored as the most sacred time of a women’s life–now it’s just nothing.”

The Manitoba Indigenous Doula Initiative is working to change that.