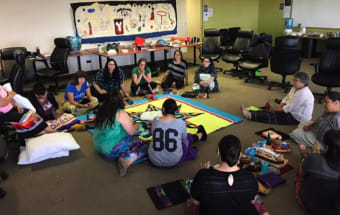 Indigenous women are increasingly returning to culturally based birthing practices to assert their sovereignty over their bodies and their birthing experience generally. In Manitoba, Indigenous women are becoming trained and engaged in supporting their fellow Indigenous relatives and community members as Indigenous doulas or birth workers.

Indigenous women are increasingly returning to culturally based birthing practices to assert their sovereignty over their bodies and their birthing experience generally. The impact of colonization on birthing experiences for First Nations women in Canada has been profound and extends into generations of families. First Nations women across Canada have traditionally birthed in their communities surrounded by families and community, observing many traditions around pregnancy and birthing including placenta burying and belly button ceremonies. These traditions and this circle of care and support resulted in resiliency, strength and a connection to the land and family. In Manitoba, Indigenous women are becoming trained and engaged in supporting their fellow Indigenous relatives and community members as Indigenous doulas or birth workers. This paper describes the experiences of the first cohort of Indigenous doulas trained in Winnipeg, Manitoba by the Manitoba Indigenous Doula Initiative (MIDI), also known as Wiijii’idiwag Ikwewag, and will describe the specific contributions and impacts of Indigenous doulas who support Indigenous women during pregnancy and birth. This paper will first provide background on some of the historical context of removing birthing from First Nations communities, the health implications of maternal evacuation, the role of support for expectant mothers, and Indigenous doulas as culturally based support. Following this, the paper will describe the research methodology that was employed, the results of our interviews and a discussion of the impact of Indigenous doulas, specifically for First Nations women who travel for birth.

Prior to the formation of Canada as a colonial nation, a traditional midwife attended births, or during periods of travel birthing women were aided by a spouse or family member [1]. The knowledge around birthing infants was transmitted inter-generationally and included not only physical logistics of birthing, but also traditional medicines to deal with a range of issues associated with delivery and postpartum [1]. First Nations women, especially those in remote communities, continued to receive maternity care from traditional midwives in the community. Due to interruptions from imposition of colonial policies and practices, this care transferred from home births to births in nursing stations with Federal nurses who had midwifery training [2]. Furthermore, this transfer of responsibility from traditional roles within the community to external service providers diminished and eventually led to the role of traditional midwives and doulas becoming diminished. Across Canada, the colonization of birthing was well underway and as Jasen [3] describes the government began to focus on reducing infant mortality as a part of these changes. As the overall health of First Nations people declined, “an assimilationist policy was directed towards bringing childbirth among these women under direct government control. Subjected, simultaneously to ideologies of both gender and race, Aboriginal people underwent a particularly stark transformation in their reproductive lives [3]. By the 1970s, the efforts to decrease maternal mortality and morbidity in the general population led to a move towards hospital deliveries for all women. For First Nations women in particular, this led to their being transferred out of their home community weeks before their due date, an event which often resulted in poor social consequences [4,5]. The evacuation policy is still in effect today, with women leaving their communities at 36-38 weeks gestation [6] and “confined” to a boarding home or motel in a tertiary care centre to wait for labour to commence. In addition to the negative social outcomes to families and women who birth outside of their community, the infant mortality rate among First Nations remains twice as high as the Canadian average [7]. In Manitoba it was found from 1991 to 2000 that the infant mortality rate for First Nations (Status Indians on reserve) and off-reserve was 10.2 deaths per 1,000 live births, or 1.9 the ‘nonFirst Nations’ IMR of 5.4 per 1,000 [8]. As Varcoe et al. [9] stated, the role and dominance of biomedicine has resulted in the imposition of medically based maternity technologies and Indigenous women are now in a situation where they are being told that “their time honored midwifery and birthing practices were unsafe and that they must turn to the advances of western medical practice for “modern” maternity care” (p. 7). The impact of this message, and how it is operationalized are significant to the physical and mental health of First Nations women and families.